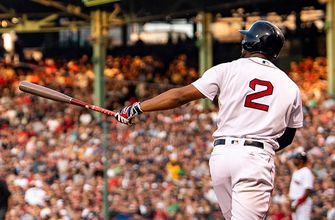 The Boston Red Sox crushed New York Yankees pitcher, Masahiro Tanaka, who gave up 12 earned runs in his start. Tanaka now has a 38.25 ERA against the Red Sox this year. The Red Sox did damage at the plate, hitting four home runs with Xander Bogaerts hitting two of the four. Their 19 runs is the most the Red Sox have ever scored against the Yankees.